Cyrus Maynard Running was born in Veblen, South Dakota, on August 2, 1913, to the Rev. Alfred Running and Sophia Olsen Running. Both his parents were born in America, but held family ties to the Trondheim and Nordfjord areas in Norway. Running attended St. Olaf College in Northfield, Minnesota, where he received his BA degree in history and biology in 1934. Running continued his education through graduate work at the Yale University School of Fine Arts where he studied for two years.

In 1940, Running received his MA from the University of Iowa where he studied with Grant Wood. Running taught high school science and music in Wisconsin and later taught art at the University of Omaha. In 1940, he was hired to be head of the art department at Concordia College in Moorhead, Minnesota. During his years at Concordia, he also studied at the University of Minnesota and received a Master of Fine Arts degree from the Instituto Allendo in San Miguel, Mexico. In 1940, he married Eldrid Thorpe, also an artist, with whom he raised four children. Orville Running (Cyrus’s older brother) and Paul Running (Cyrus’s younger brother) are also featured as Highlighted Artists in Luther College’s Fine Arts Collection. Cyrus M. Running died on December 25, 1976 in Moorhead, Minnesota.

Running was known as a teacher and leader as well as an artist. While at Concordia, he expanded the art department program, leaving behind a strong tradition in the visual arts. In recognition of his accomplishments, a bronze bust of Running was commissioned which was dedicated in 1978. In addition, “The Cyrus M. Running Gallery” at Concordia College was named in his honor. While on the faculty at Concordia, he also designed the mural/backdrops for the annual Christmas concerts which he created with student help for thirty years. Several of his works are also displayed on the campus in various buildings.

Running exhibited at the Minnesota State Fair six times. He also exhibited at the Minneapolis Institute of Art in 1959 and 1961, and at the Walker Art Center in Minneapolis in 1947, 1949, 1956 and 1962. In 1958, he was invited to exhibit four works at the Walker. His works were displayed at the Red River annual art exhibitions in 1960-1963, 1965, and 1967. Additionally, works by Running were included in the exhibition sponsored by the Minnesota Historical Society at the James J. Hill House in Minneapolis during 2000. Running regularly exhibited at the Luther College Fine Arts Festivals, which were held from the late 1950s through the 1960s. During these years, he also was a judge at several festivals. Running was also known for creating sixteen large architectural commissions consisting of paintings, murals and mosaics. He illustrated at least two books, Fjords and Faces by Kristian Prestgard (Augsburg, 1937) and Streiftog: Stemninger og Skildringer by the same author (Augsburg, 1937). His paintings also illustrated a booklet entitled Stewardship: Christianity Lived Responsibly for the Evangelical Lutheran Church in 1957. The Luther College Fine Arts Collection contains seven works by Cyrus Running, all but one purchased at the Fine Arts Festivals sponsored by Luther College. The works are woodcuts, oil paintings, and watercolor paintings. 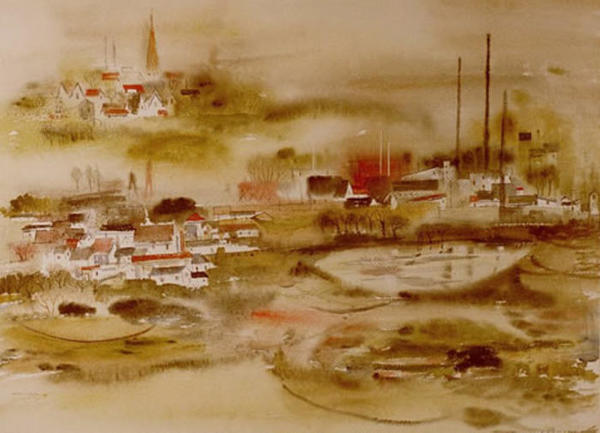