Luther is obligated to measure its campus carbon footprint as part of Second Nature’s “Carbon Commitment,” which Luther has signed with a network of colleges and universities.

Measuring the carbon footprint is somewhat complicated, but the basic idea is simple: addressing climate change means reducing emissions and the first step is counting everything up. We’re shooting for carbon neutrality eventually but this is a long journey. Here is the quick version of the past, present, and future or Luther’s carbon footprint.

Luther started measuring our emissions in 2006 when a group of environmental studies students did a preliminary analysis as part of a class. They presented their findings to college leaders, including President Richard Torgerson, and that started a larger conversation about how the college could be a “model, not a mirror” for society in reducing our emissions. Two years later the college set a goal to cut emissions by 50% as part of Luther’s strategic plan. At the time, no one knew how we’d do this but there was a strong commitment to make it happen.

The largest part of all reductions have come through energy efficiency. From changing light fixtures and other equipment to improving insulation, Luther has made huge strides through investing in long term efficiency. The second part of this is more renewable energy. The Luther wind turbine was installed in 2011 and that took a big bite out of our emissions, producing roughly a third of Luther’s electricity. Then major solar projects came on line in the succeeding years culminating with the huge solar plus storage project on the north edge of campus.

All together these projects have cut our fossil fuel electricity more than in half and reduced our overall footprint well past that original 50% goal. Renewing Luther’s commitment to sustainability, the Board of Regents (Luther’s governing body) adopted their own goals in 2012 calling for a 70% reduction by 2020 and carbon neutrality by 2030. Luther is a little behind but not much, achieving a reduction of 64% from baseline in 2021 with a good chance of making 70% this year.

Next time: How will we get to carbon neutrality by 2030? 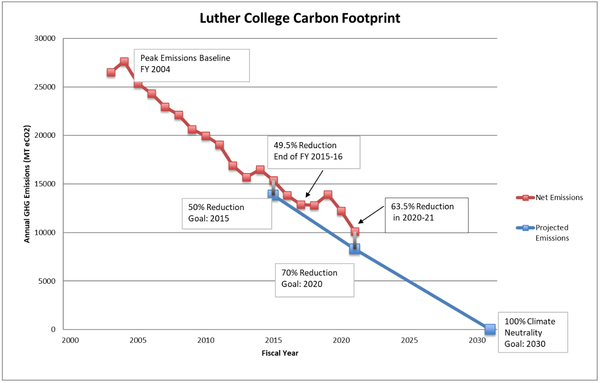 How Will We Get to Carbon Neutrality by 2030?