This article first ran in the winter 2012 issue of the Luther Alumni Magazine.

Most Americans remember exactly where they were on the morning of September 11, 2001. Karla Yukari (Pratt) Sakamoto ’89 recalls the previous morning just as vividly.

The day before the worst terror attack on American soil, she was 107 floors up in the North Tower of the World Trade Center attending a wine seminar at the Windows on the World restaurant.

When both World Trade Center towers collapsed the next day, Sakamoto—who had previously worked as a wine steward at the famed restaurant—lost several friends and former coworkers. The experience changed her forever.
“After the towers fell, it was very hard to be in the city—I knew that I too could have lost my life that day,” she says. “My takeaway was that life is a gift and all that truly matters in life is your family and friends.”

Within months Sakamoto had finished up her coursework at the French Culinary Institute and American Sommelier Association, packed her bags, and boarded a flight from New York to Japan—the country where she had been born and where most of her relatives still lived.

There she immersed herself in her Japanese heritage while joining the staff of Coco Farm and Winery, a vineyard north of Tokyo that also houses a school for mentally challenged adults. Working with those students—many of whom were also employed at the winery—helped her push past the events of September 11. “I was so touched by them,” says Sakamoto, who had previously spent two years in Japan, one teaching English and one doing public relations, after graduation from Luther. “They were hard workers and so pure.”

It was her work in the sake department of the store’s famed depachika food shop that inspired Sakamoto—who has written for such high-profile magazines as Time and Food & Wine—to pen Food Sake Tokyo, a food lover’s guide to Japanese cuisine published by the Little Bookroom as part of its Terroir Guide series.

“I often saw non-Japanese walking around the store looking at the beautiful bento boxes and other food and not knowing what a lot of it was,” she says of her motivation for writing the guide. “I wanted to write a book that would help demystify the cuisine and introduce readers to not only restaurants but also food, shops, and markets in Tokyo.”

And she did just that, according to the Japan Times, which calls Food Sake Tokyo “the first proper English-language guide devoted specifically to eating and drinking in the megalopolis.” (The book also garnered props on Twitter from celebrity chef Rick Bayless, who urged his 200,000-plus followers to buy it if they were ever headed to Japan.)

The most intriguing part of the Tokyo food scene, according to Sakamoto? The seasonal diversity of the food found there.

“The many different types of seafood are impressive, and they change throughout the year,” she says. “The produce is constantly changing with the seasons as well.”

Though Sakamoto grew up in Monticello, Minn., eating (and preparing) Japanese fare like the Spinach dish ohitashi—her mother is a native of Japan—it’s safe to say that a career in the Japanese food and wine industry wasn’t on her radar when she entered Luther in the fall of 1985.

In fact, she began her college years on a pre-med track before, as she recalls, “slowly switching to music.” Her musical endeavors also included playing the piano—a longtime interest—and singing in Pike Kor and Collegiate Chorale. And while her music major may not, at first blush, seem directly connected to her career path, Sakamoto would be the first to say that her liberal arts education has served her well since leaving campus—especially during the 10 years (1991 to 2000) she served as a trip director for Carlson Marketing Group. (She spent her summers during those years as dean of the Concordia Japanese Language Village.)

“My Luther education allowed me to converse confidently with my clients,” says Sakamoto, who worked with myriad Fortune 500 companies through Carlson. “I dealt with people all over the world.”

She also traveled the world—staying at the best hotels, dining at the top restaurants, and soaking up all she could about food and wine. Still, she yearned to learn more. “It was with Carlson that I realized that I wanted to pursue a culinary education—not necessarily to work in a kitchen, but to attain professional culinary skills,” says Sakamoto of her decision to begin training as a chef and baker at the French Culinary Institute in 2000.

Today she puts that education to frequent use in her work as a culinary journalist and consultant—not to mention in the kitchen of the Tokyo home she shares with her husband, Shinji Sakamoto (a Japanese fishmonger), and their infant son, Luca Haruto.

And just as returning to Japan helped her gain perspective following the tragedy of September 11, so too did the arrival of her son—born, not incidentally, in Manhattan exactly nine years to the day after Sakamoto watched the Twin Towers collapse.

“I was nursing my son while viewing the memorial ceremony on television and cried as my friend’s name was read,” she recalls. “As I looked down at my son, my tears turned to tears of joy for the gift of life that I was holding.” 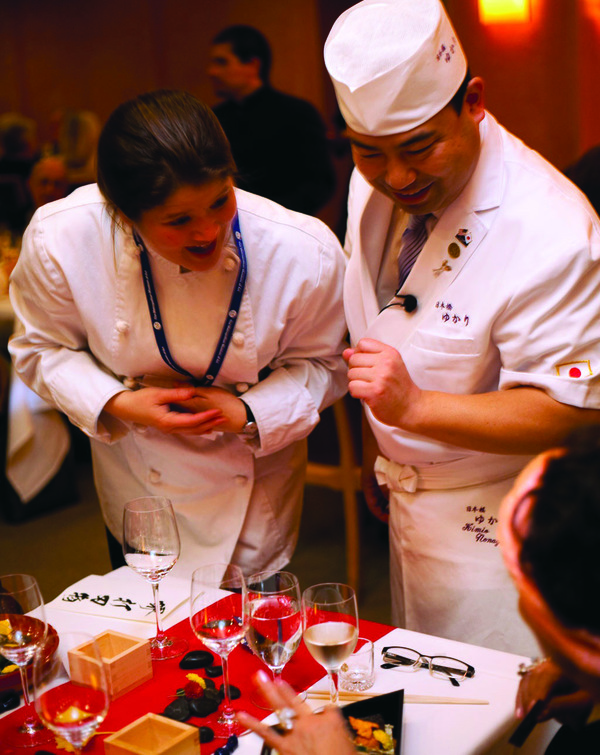 Cole '04 writes about growing up in Liberia during civil wars