Schweizer teaches Luther’s entrepreneurship course. He has developed a wide-ranging network of business experts from around the world, and he used the Malcolm and Maybelle Estrem Endowment for Entreprenuerial Studies to bring in the speakers. They shared their experiences of risk, passion, failure, and success with classes in management, economics, accounting, and the visual arts as well as entrepreneurship. He regularly brings in guest speakers because, he said, “They tell it like it really is, and you get a consistent theme. There are certain things that the students hear over and over. If I were to say those things, they wouldn’t have the same credibility.”

According to Nick Krasky ’14, an economics major and management minor in the entrepreneurship class, “One of the most valuable takeaways from the course and from the speakers was the common traits they share. These entrepreneurs are highly motivated people with vision that extends well beyond the present. Each of them faced challenges and failure along the way, but they persevered because they were passionate about their vision and their future.”

Entrepreneurs, by definition, try new things, and one common message was that students should not fear failure, but view it as an opportunity to learn. Mistakes—their own and those of others—provided valuable guides about what not to do, many of the speakers said.

“I learned the most by working at a company that was going bankrupt,” said Bill St. Angelo ’80. He later founded successful businesses in the hotel booking industry, launching an online platform in 2000 that allowed hotels to directly manage their online presence and reservations. The company experienced rapid growth and went from 400 to more than 6,000 client hotels, becoming the second-largest provider in the industry. In 2003, he sold the company.

Ron Have, a member of Luther’s Board of Regents, founded and ran a successful trucking firm for 40 years. “I made every mistake you can possibly make,” he told Schweizer’s entrepreneurship class about starting the business. He borrowed the money to start his business, persuading his father to take out a mortgage on his house. But in his first year, he lost money.

“That kind of wakes you up. You’ve got your dad’s house on the line, you’re not pulling a paycheck out of the thing, and you’re still losing money,” he said. His solution was to buy another truck and increase his business. “The good news for my dad was that in the 10th month of his adventure with us, we paid off his house.”

Emily Voss ’13 also started small with her photography business, VOSStudios, in Wausau, Wis. She began doing photography professionally in 2008, and in 2009, her first year at Luther, she received the Daryl and Audrey Erdman Prize for Entrepreneurship. The award money went toward camera equipment, and, Voss told students, she has been putting her profits back into the business ever since.

When it came time to decide which direction she would go after graduation—become an assistant to a successful photographer or open her own shop full time—Voss chose to run her own business as a learning experience. She began operating the studio full time just 13 days after graduating from Luther. With a passion for portraiture, Voss said, her dream job would be to do photography for cosmetics companies.

In her talks with students, Jill Voss Wachholz ’89, no relation to Emily, emphasized the importance of pursuing one’s passion. “As you grow in your career, you find out what you have passion for, and you start moving toward that,” she said. Jill Voss Wachholz is a certified public accountant with more than 24 years experience in banking and accounting. She worked her way up to senior audit manager in the banking group at KPMG in Chicago and then took a position as vice president and controller at Oak Brook Bank. While there, she established eight subsidiaries and was responsible for the bank’s regulatory, SEC, and tax reporting matters. By 2006, Voss Wachholz had become executive vice president and chief financial officer.

Then the bank was sold and she had to make a big decision, she told students. Did she want to stay and work in a role with a smaller scope—although at a much larger company—or leave? Voss knew that she wouldn’t enjoy limiting herself to only one aspect of a business, so she followed her passion and took another job that would give her a broader involvement. “I took the risk to do something a little more entrepreneurial and joined with some people I had worked with who were forming a new bank,” she said. “I stopped being so much of an accountant and started being an overall business manager. I’m helping us grow as a very profitable bank, and I’m really excited about that.”

For Bernard Golden, success revolves around becoming the expert on new technologies. Golden, who is vice president, strategy, for Active State Software, was named by Wired.com as one of the 10 most influential persons in cloud computing. He recommended students read books such as Average Is Over by Tyler Cowen, The Innovator’s Dilemma by Clayton Christensen, and The Singularity Is Near by Ray Kurzweil, which argue the importance of staying on top of new technologies and that being average will no longer earn what it used to.

Other speakers who shared their business stories with students in spring 2014 were Jessica (Schwab) ’07 and Derek Balsley ’05, founders of The Art of Education, an online professional development resource for art teachers; Ross Hadley ’95, owner of Amundson’s Clothing in Decorah and Open Decorah, which offers office space that can be shared by separate businesses; Patrick Jeske and Adam Aalgaard, founders of an interdisciplinary design company and consultancy; Mike and Dominique (Eells) Bockman ’92, who shared the story of their T-Bocks Bar and Grill in Decorah; and Jacob Johnson ’04, founder of Innovosource, which works with research institutions to accelerate interaction and innovation exchange. Johnson helped teach the entrepreneurship class. 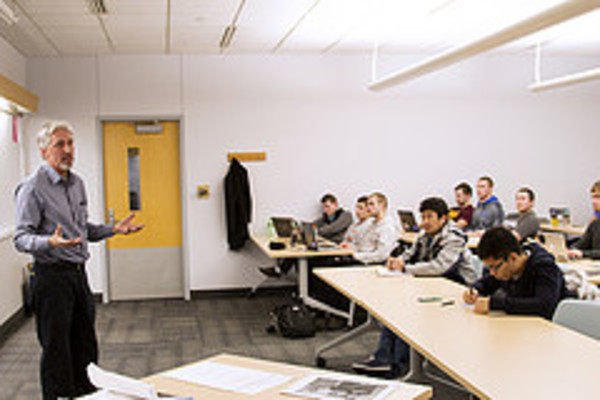