The Luther College wind turbine was installed on September 19, 2011 and commissioned by General Electric on November 1, 2011. Located on the bluff west of campus, the turbine symbolizes Luther’s commitments to sustainability and represents a significant measure to reduce campus greenhouse gas emissions and long-term electricity costs.

The 1.1 mile-long transmission line was installed underground to protect the beauty of the surrounding area. The line carries the wind-generated electricity north and then under US-52, south along Valley View Drive, under the Upper Iowa River, and then east to the Alliant Energy distribution line that serves the Luther campus.

On average, the wind turbine generates 3.6 million kilowatt hours (kWh) of electricity per year, which is about 27 percent of all power consumed on campus. The offset greenhouse gas emissions represent approximately 10 percent of Luther’s peak carbon footprint.

Luther College purchases all of the Renewable Energy Certificates (RECs) from a single turbine community wind project owned by WindVision, LLC. The turbine is located 65 miles away in St. Ansgar, Iowa. Luther began purchasing the RECs in 2009 as one of several tangible steps it took to implement its obligations under the American College and University President’s Climate Commitment, and also in conjunction with meeting LEED standards associated with the construction of the Sampson-Hoffland Laboratories.

The turbine will enable Luther to reduce its campus carbon footprint by another 14-15 percent.

View of the wind turbine as the sun sets. 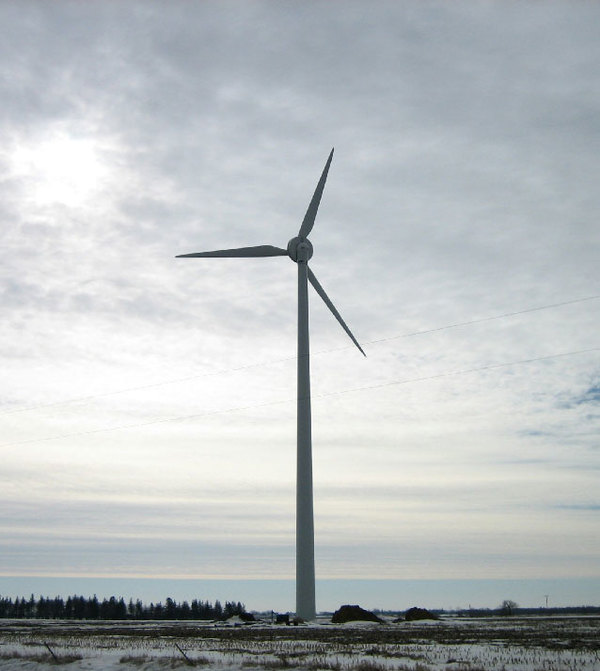